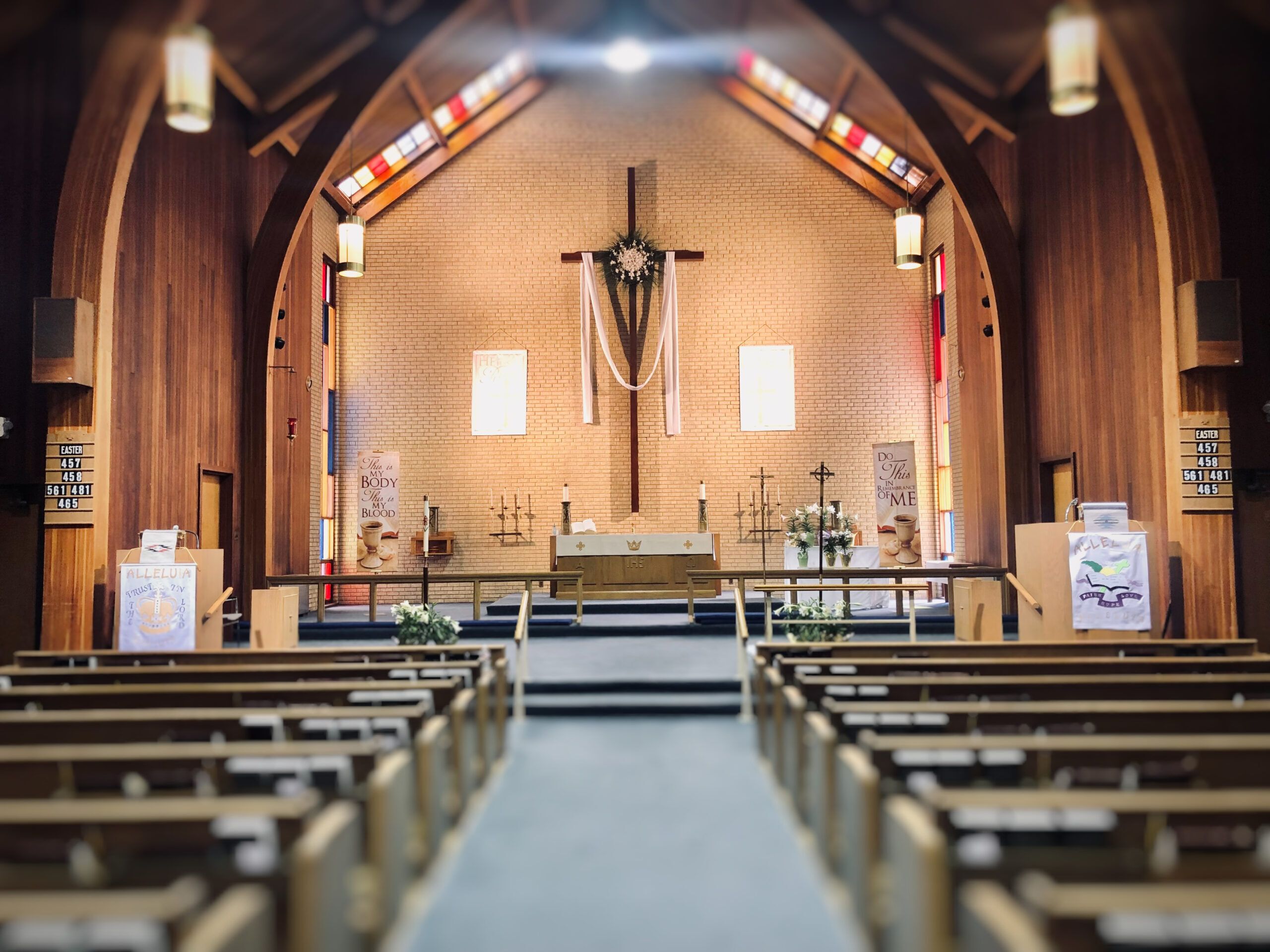 “And there is salvation in no one else, for there is no other name under heaven given among men by which we must be saved” (Acts 4:12). Celebrating 175 years is important. But it’s a rather brief period compared to the 500th anniversary of the Lutheran Reformation. It’s less significant still compared to the 2,000-year history of the Lord’s Church, and it pales in comparison to the 4,000 years since the call of Abraham and the promise of the Savior given by the Lord to him.

In the past decade of serving the congregations of the Synod, I’ve learned that I am not that significant, either, especially in the history of the Synod. Nevertheless, God works what He wills despite our insignificance. If a new Lutheran church body began today with 12 congregations, it would be the butt of unending jokes, as was the Missouri Synod in 1847. If it were to claim that its constitution was the restoration of the authority of the inerrant Scriptures, the Lutheran Confessions and authentic New Testament Christianity, it would be ignored, laughed at and scorned. If it claimed the Bible and Luther’s catechism are absolutely true and that there is no other God than the Holy Trinity and no salvation outside of faith in Christ and His blessed cross and resurrection, its founders would be accosted as kooks by contemporaries.

How insignificant were 14 congregations and a handful of pastors 175 years ago? They knew they were numerically insignificant. They knew they were the object of ridicule in a world awash in agnosticism, especially in the church. They lamented the state of their mother churches back in Europe where the Gospel had largely been supplanted by mere morality. Even pastors no longer believed the Word of God.

Like ours, their world was in chaos. Revolutions shook all of Europe in 1848. Atheism was rife among German immigrants to America. A cholera epidemic raged in the U.S. in 1849 and killed thousands. The liberal Germans in St. Louis attacked the Saxons from the moment they stepped off the boat. The LCMS was poor, small, weak, and they knew it. And because they were far flung from Michigan, Indiana, Ohio, Buffalo and St. Louis, they were lonely. But they were certain of one thing: Luther’s Reformation had rediscovered and re-asserted the truth of the free forgiveness of sins in the blessed Gospel of Christ, delivered by the Word and distributed in Baptism and Christ’s body and blood in the Sacrament. They came from various backgrounds. Some had been theological liberals (Wilhelm Sihler), many had been pietists (overemphasizing religious feelings as the ground of faith and certainty over the objective teachings of the Bible and catechism). Personal crises had driven a number of them to believe the Bible, read the Lutheran Confessions and confess the old teachings of the Lutheran Church as the teachings of Scripture.

Through Dr. C.F.W. Walther’s “The Lutheran” newspaper (Der Lutheraner), they discovered each other. They corresponded. They hatched a plan for a Lutheran Synod (synod means “together on the same road” in Greek), crafted a constitution (which still survives, mostly word for word in the present LCMS constitution), and officially brought the church body into existence in Chicago on April 26, 1847. The Missouri Saxons brought their log cabin seminary, after Wilhelm Loehe gave the Synod a seminary in Fort Wayne. They embarked on a mission to share the Gospel far and wide, and were keenly aware of their divine mandate to “seek and save the lost.” They educated pastors and sent them to shepherd the thousands upon thousands of German-speaking immigrants spreading across the wide reaches of America. They planted churches for Germans who had left their homeland for economic promise and had come from weak churches in the old country. In New York and Boston, they met the immigrants as they came off the boats and sent them to German communities served by pastors across the fruited plain. Walther and others spoke English, but they concentrated on German-speaking communities because of the enormous opportunity and volume of work. Eventually, they were only too happy to help found an “English Synod,” which became the “English District” of the LCMS (1911).

Just like 175 years ago, war has returned to Europe. We’ve suffered a global pandemic. The church is in grave decline in the West. Just google “Decline of the Church in the West” for the shocking statistics, particularly in the U.S. The “woke” culture ubiquitous on university campuses all around the world has created a culture of sexual ambiguity. In some ways, the LCMS is doing slightly better than many churches, but we, too, are heavily affected. Easy fixes are mythical. Our children are bombarded from the earliest age with the lies of a morally adrift culture. For 60 years, the sexual revolution has taught that sex is subjective, a personal choice, and one may be one’s own creator. Our governments support “sex change” operations even for minors. The abortion of a child as an inconvenient byproduct at odds with one’s own self-determination is one of the greatest indicators of the denial of our Creator and His will for His creatures, created male and female. (Read Carl Trueman, The Rise and Triumph of the Modern Self.) Apocalyptic times indeed. Come, Lord Jesus!

What’s the answer? What’s our task? What’s our message? Only Jesus. “There is no other name under heaven given among men by which we must be saved” (Acts 4:12).

Today, we are just under 6,000 congregations. Is our constitution antiquated? Not unless the Word of God is antiquated. “The word of the Lord remains forever” (1 Peter 1:25). Today, we have 5,700 active pastors sharing Christ, day in and day out. Today, we have the largest Protestant parochial school system in the U.S. We have thousands of teachers sharing the message with “the least.” “Your Creator is the Triune God.” “He has made you. You are His.” “Only Jesus is your Savior.” And “He has redeemed you as His very own creature.” We equip our people with Jesus; fortify our mothers and fathers; strengthen homes to love, teach and prepare children for life in this world with its challenges and blessings; shore up our men to be men in God and our women to be holy women of Christ.

Today, we face the hatred and ridicule of the world, a world in chaos. Our fathers and mothers in the faith faced the same. Today, we face the same threat of loneliness and isolation they did. Whether the loneliest pastor and tiniest congregation in the farthest reaches of the earth or the president of the Synod, we are terribly insignificant. Imagine those 14 lonely, insignificant congregations in 1847. What a difference it made for them to be joined in faith and love in the Lutheran confession.

Today, we face very similar challenges. The decline of Christianity in the West presents us with the greatest challenge in the modern history of the church. With Jesus, and only Jesus, we shall go forth nevertheless: “Go therefore and make disciples of all nations, baptizing them in the name of the Father and of the Son and of the Holy Spirit, teaching them to observe all that I have commanded you. And behold, I am with you always, to the end of the age” (Matt. 28:19–20). “Let us hold fast the confession of our hope without wavering, for he who promised is faithful” (Heb. 10:23).

Who we are — a 175-year-old church body — is important, but it pales in comparison to the history of the church. But what we do — preaching and pointing to Jesus for 175 years — is quite significant indeed. It has eternal consequences. If 175 years is an accomplishment, it’s Christ’s accomplishment. Come what may, the next 175 years are in the hands of Jesus, only Jesus, and so are we.

Comments are closed, but trackbacks and pingbacks are open.

No comments to show.